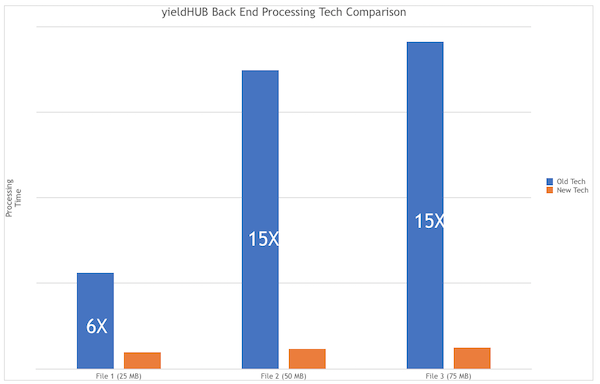 yieldHUB announced a significant increase in the speed of their yield management system. It is now up to five times faster than it used to be, including in the analysis of STDF and other industry data formats. yieldHUB is a semiconductor yield management provider and hundreds of product and test engineers worldwide use their system daily.

Yield management systems are essential in the semiconductor industry where both margins and deadlines are tight. A good YMS helps its users to track what’s happening on the factory floor and recognise anomalies. This enables them to fix problems as they arise, thereby reducing scrap and improving yield. Any improvement to the system provides a positive benefit to production. Yield management systems mean that engineers spend less time finding data, and more time solving problems.

yieldHUB’s system was already impressing customers with its speed. But the company continually improves its products and services. John O’Donnell, CEO, yieldHUB said “The semiconductor industry is a fast moving one. Our customers need continuous innovations in our service, to help support their continued growth. If we don’t develop our products, we fall behind.”

One of the great things about this speed up is that it almost completely removes the performance gap between cloud hosted and on-site bare metal servers. The availability of new storage technologies, new storage drivers and the latest operating system updates enables much closer to “bare metal” performance using cloud hosted solutions. Couple this with some re-organising of how data is laid out and some proprietary management scripts means you don’t have to sacrifice the flexibility and scalability that cloud servers provide. And for those people who prefer their servers on-site, modern virtualization technologies can be used to get the same flexibility and performance on your own site.

Speaking about this Jerome Auza, Director of Engineering, yieldHUB said “This new technology is a fabulous break through and it has been a boon to us as we continue to improve the speed of our software using C++ and other similar programming languages. We’re currently upgrading our customers to this new faster service. All new customers will be on the faster version from the start”

This development means that customers will be able to create and view reports quickly, at the touch of a button. Speed, scalability and security are among the core principles of yieldHUB, reflecting the needs of their customers.

The easiest way to reduce the cost of manufacture is to reduce the amount of time it takes to complete the project. By increasing the speed of your yield management system, there is a tangible reduction in time for reporting. This means the engineers have actionable data sooner. They can act on the data and solve problems faster than they did before

For example, yieldHUB Characterize (yieldHUB’s bespoke characterization tool), reduces a specific part of new product introduction (NPI) from weeks to hours once testing is complete. With the increased speed, this now takes minutes.

yieldHUB is offering free demos of their system so you can compare it with your current solution.